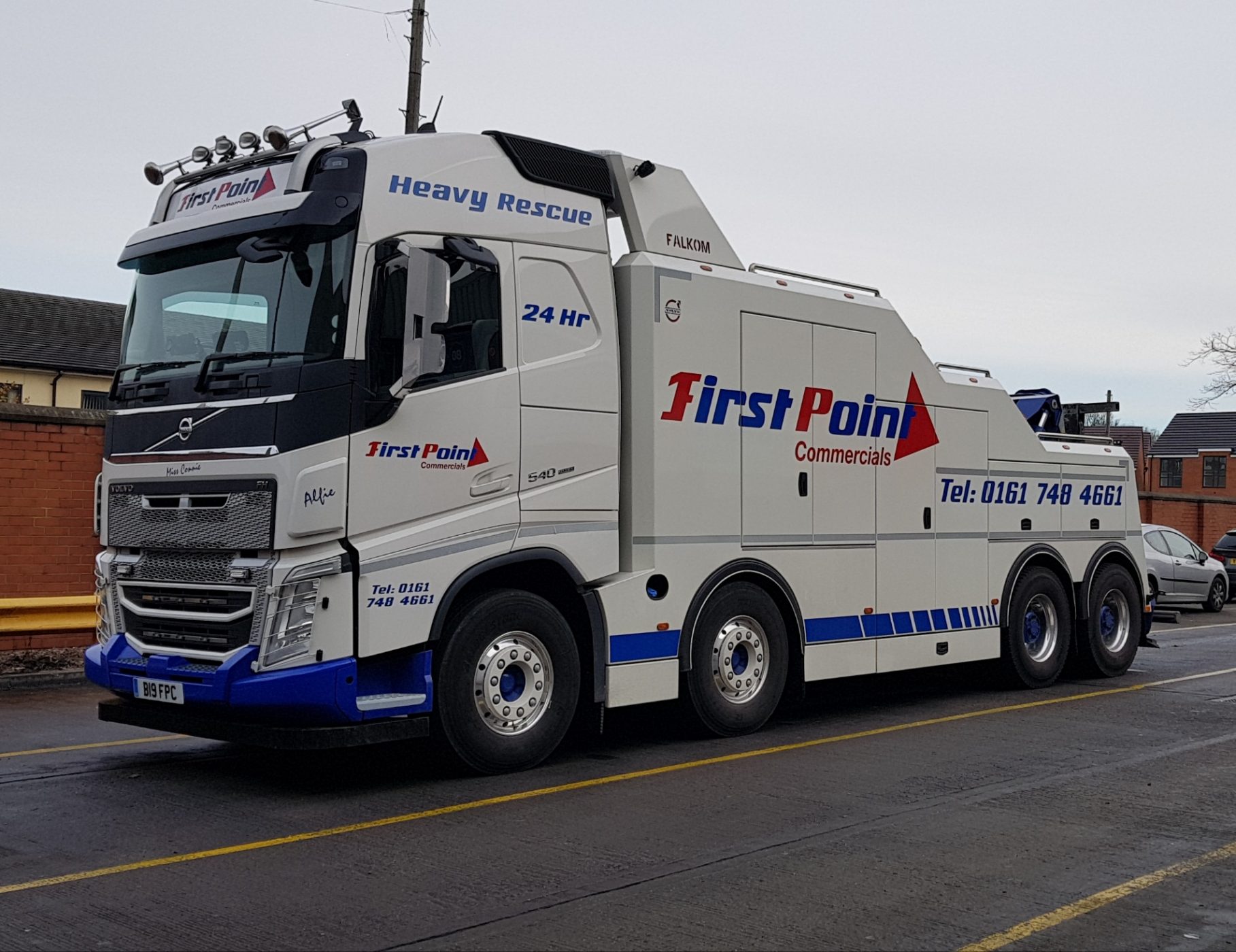 The newest addition to the RS Recovery Ltd family.  Previously owned by First Point Commercials in Manchester, we snapped at the opportunity to acquire it.

Its 8×4 chassis with Globetrotter cab, 13-litre engine, I-shift transmission and was custom-designed and manufactured at the the Netherlands-based Falkom factory.  Fitted with the FAW 25.000 kit, the top boom equipment has a 25-tonne lift capacity and an underlift capacity of 10 tonnes at its full reach of 4.5 metres.  The front-steer axles are rated at nine tonnes each and the rear axles are air-suspended, double-drive, hub-reduction rated at 26 tonnes.

The 2017 Euro 6 chassis will also enable us to meet the Low Emissions Zone criteria for travelling into London and the impending zone for Birmingham City in 2020. 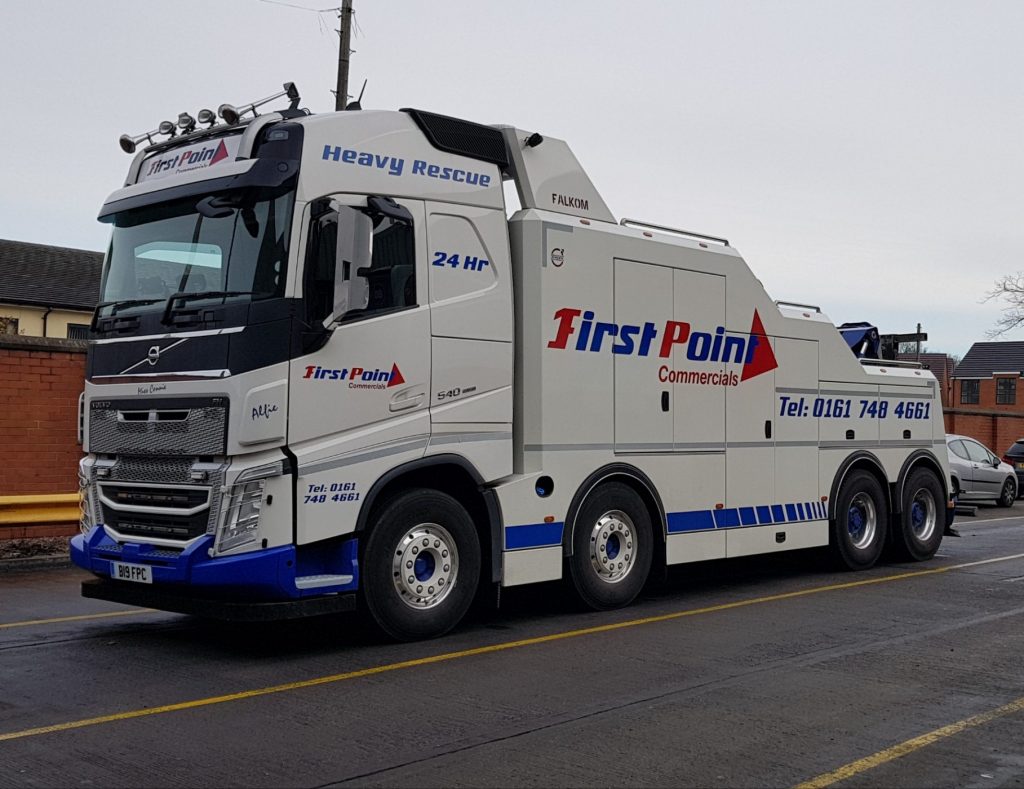 It has been kept immaculate by the team at First Point Commercials but we’re looking forward to getting it in our colours in 2019.

Well done to our team who attended Wessex Truck Show. 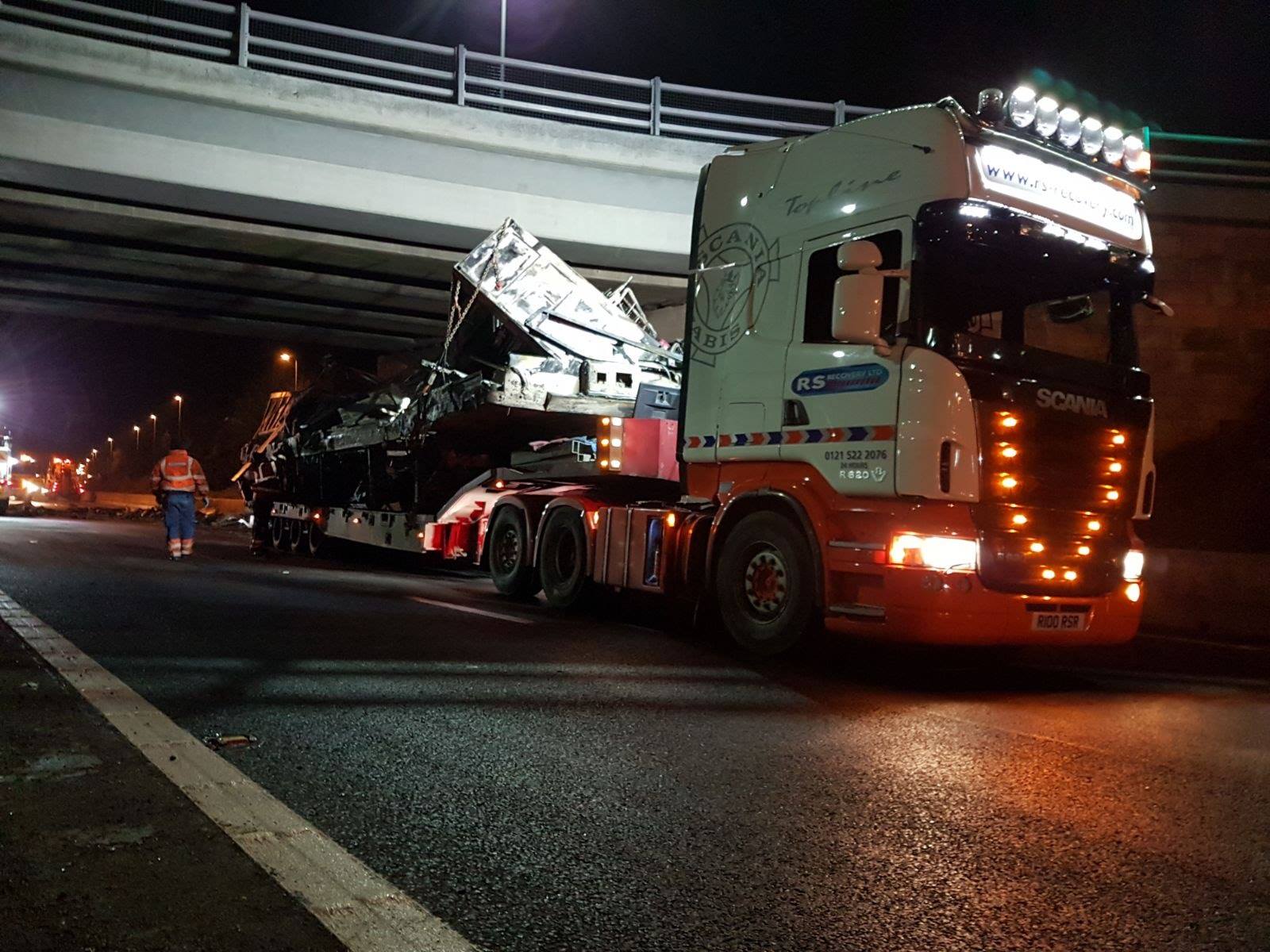 On the 3rd January 2018, RS Recovery were called late in the afternoon to attend a major incident involving an fully loaded HGV on the M5.  A HGV was overturned and been on fire, which devastated the entire vehicle.  Prior to our arrival, the emergency services had put out the fire and once it had cleared, it was apparent that there was no remains of the vehicle apart form the steel structures and debris. 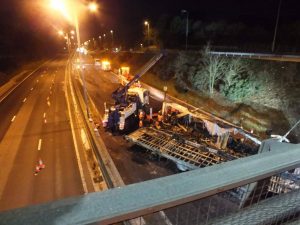 We executed a plan in agreement with Highways England to ensure the motorway was able to be opened the following morning, with enough time for the highways services to undertake necessary roadworks.

Due to the condition of the HGV it was a thoughtful and time-consuming job that involved removing amounts of debris and cutting large sections of the vehicle.  We employed the help of a specialist grab hire company to clear the debris and gain access to the vehicle.  Once the majority of the burnt debris was cleared, the tractor unit was split from the trailer and loaded on to a low loader.  As the trailer was a double deck, sections of it needed to be disassembled and cut to ensure it could be safely transported away from the scene.  Once this was complete, it was lifted by 2 of our vehicles and loaded on to another waiting low loader. 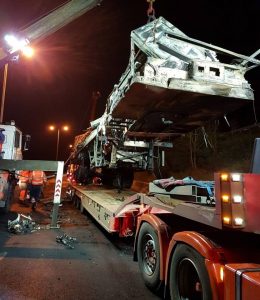 Once placed on to the low loader, the sections of the trailer were secured and the load was escorted back to our base. 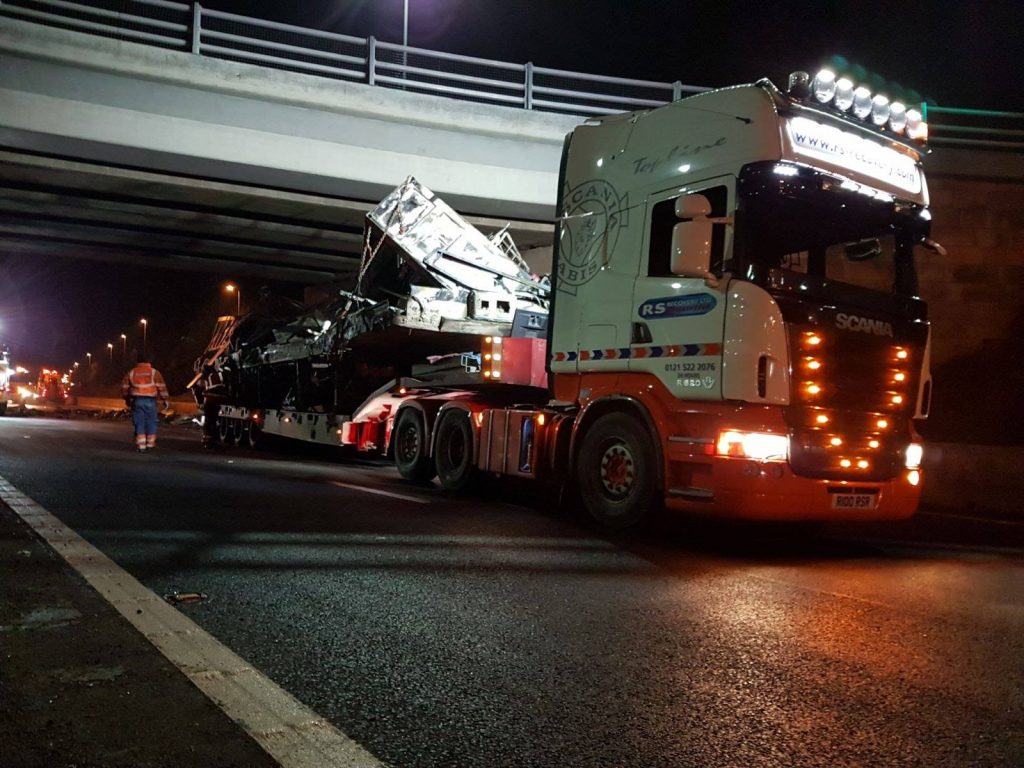 We understand the driver was pulled out by a member of the public and taken to hospital as a precaution. 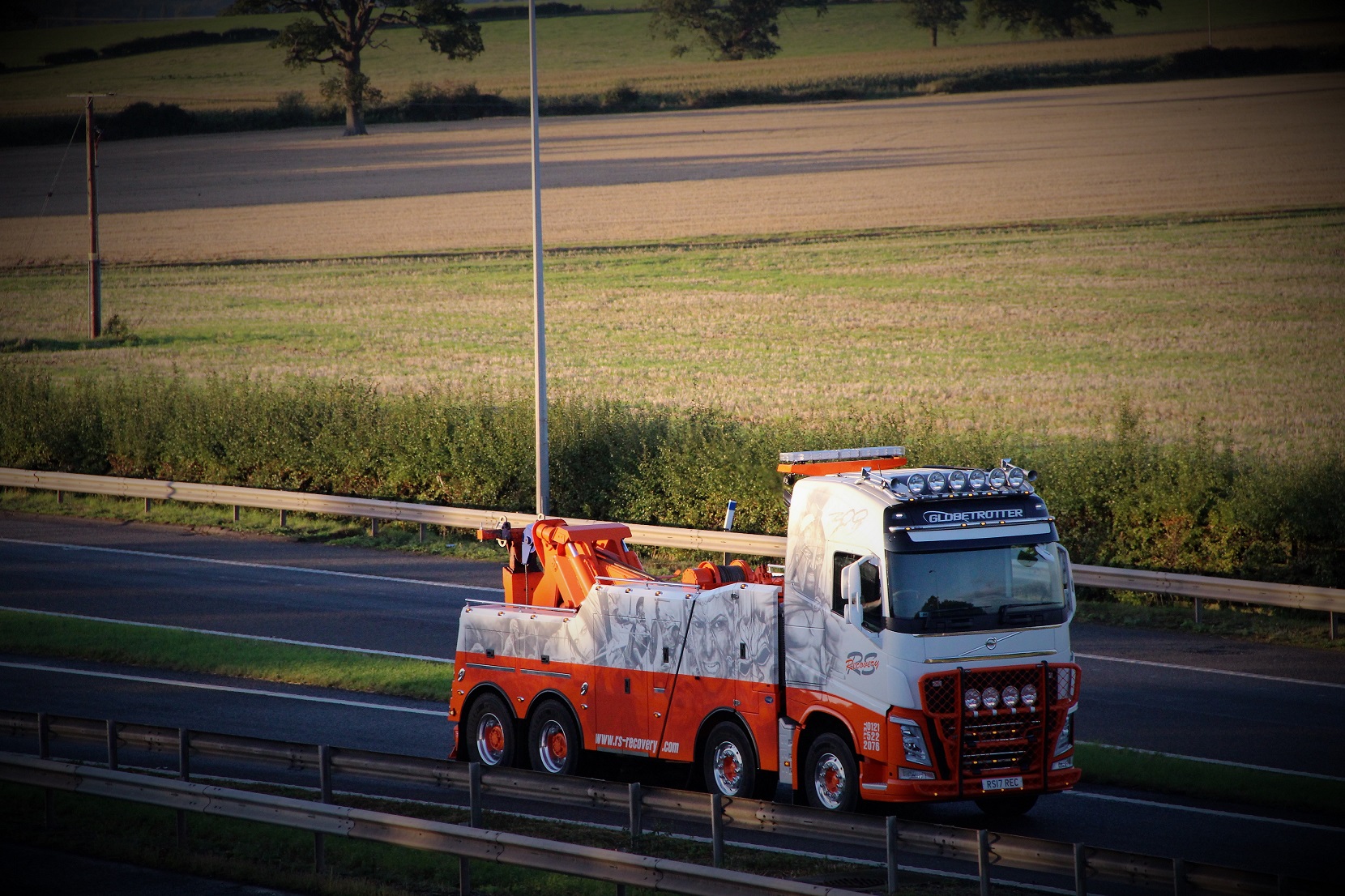 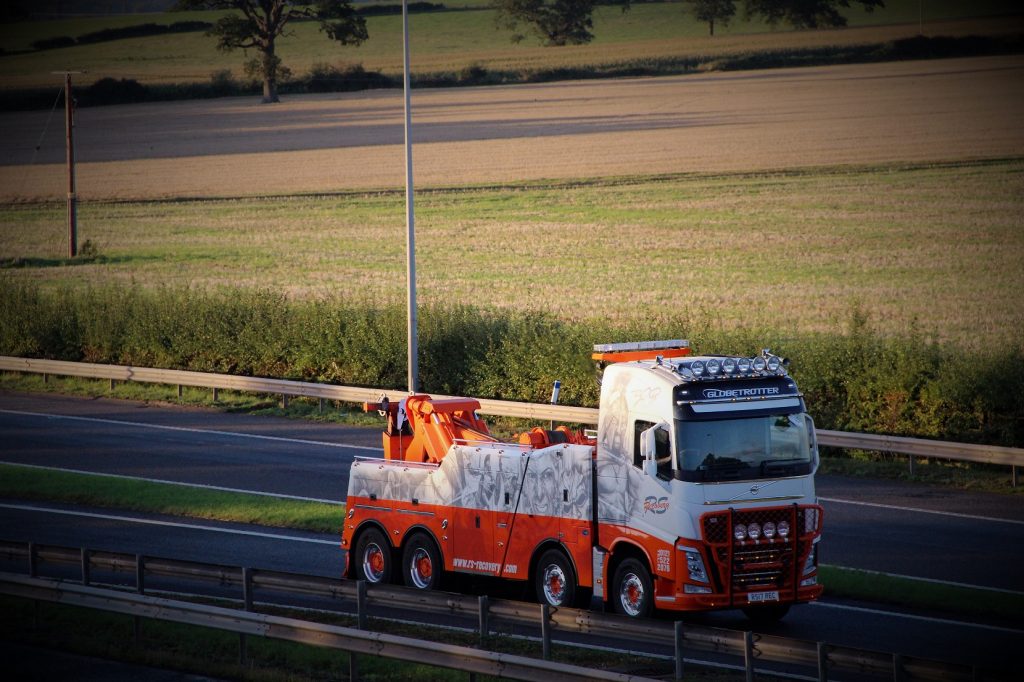 RS17 REC was captured by Rob Payne on the M5 near Strensham. A great picture don’t you think. 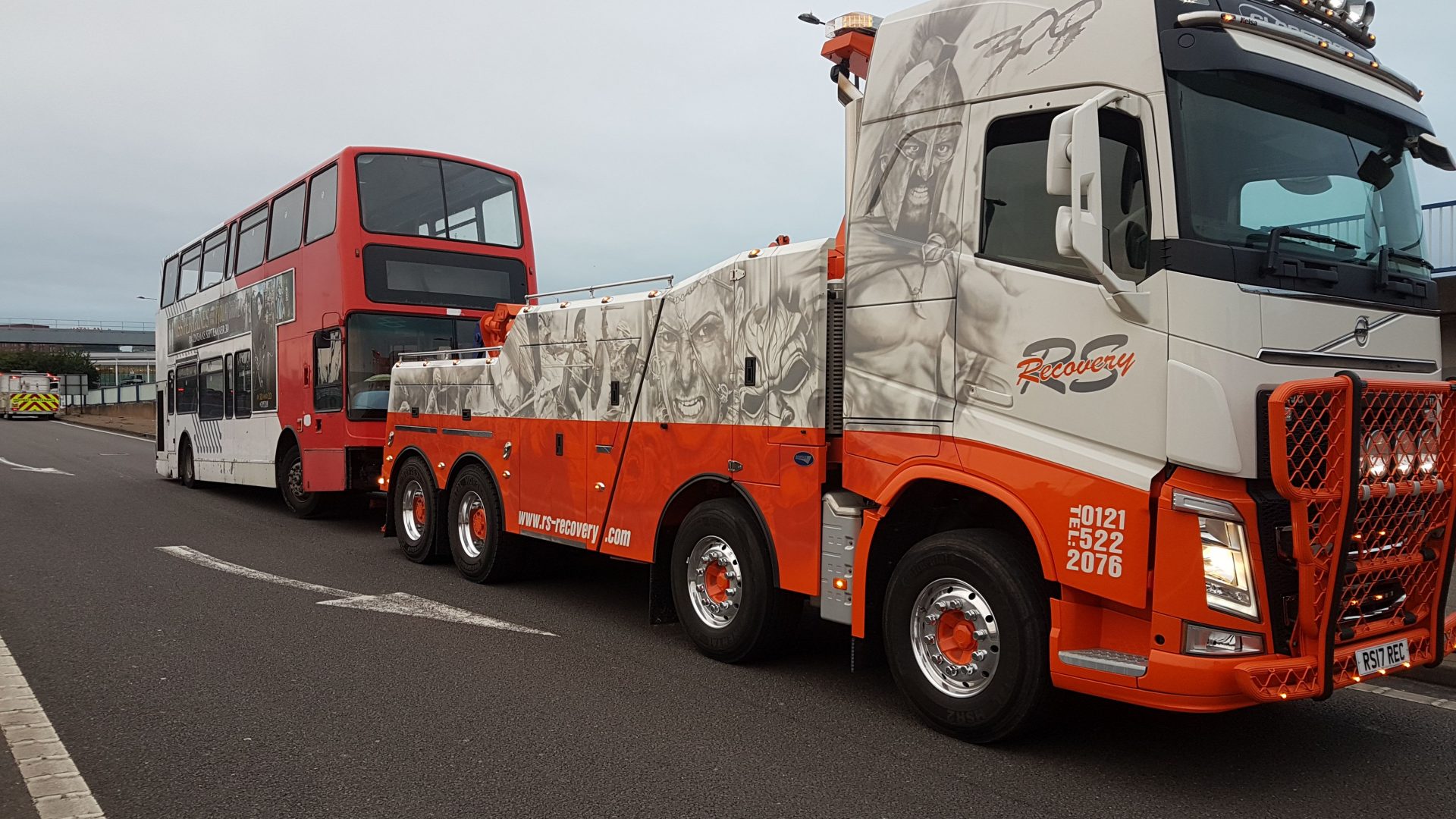 We had the pleasure to assist the West Midlands Emergency services by recovering a bus into place on the A38 Aston Express Way in Birmingham.  An exercise was undertaken throughout the night and coordinated with a number of agencies to simulate a major road traffic incident.  National Express West Midlands who’d provided the bus, asked us to deliver it and put it place with a number of special requirements so that it was as realistic as possible.

We were glad to have been involved in such an exercise and its importance for continually improving the emergency services.  A short video on the West Midlands Fire Service can be viewed below.

We staged a big training exercise last night on the Aston Expressway in Birmingham, to test and perfect several agencies' emergency response pic.twitter.com/jhvj49UhFZ 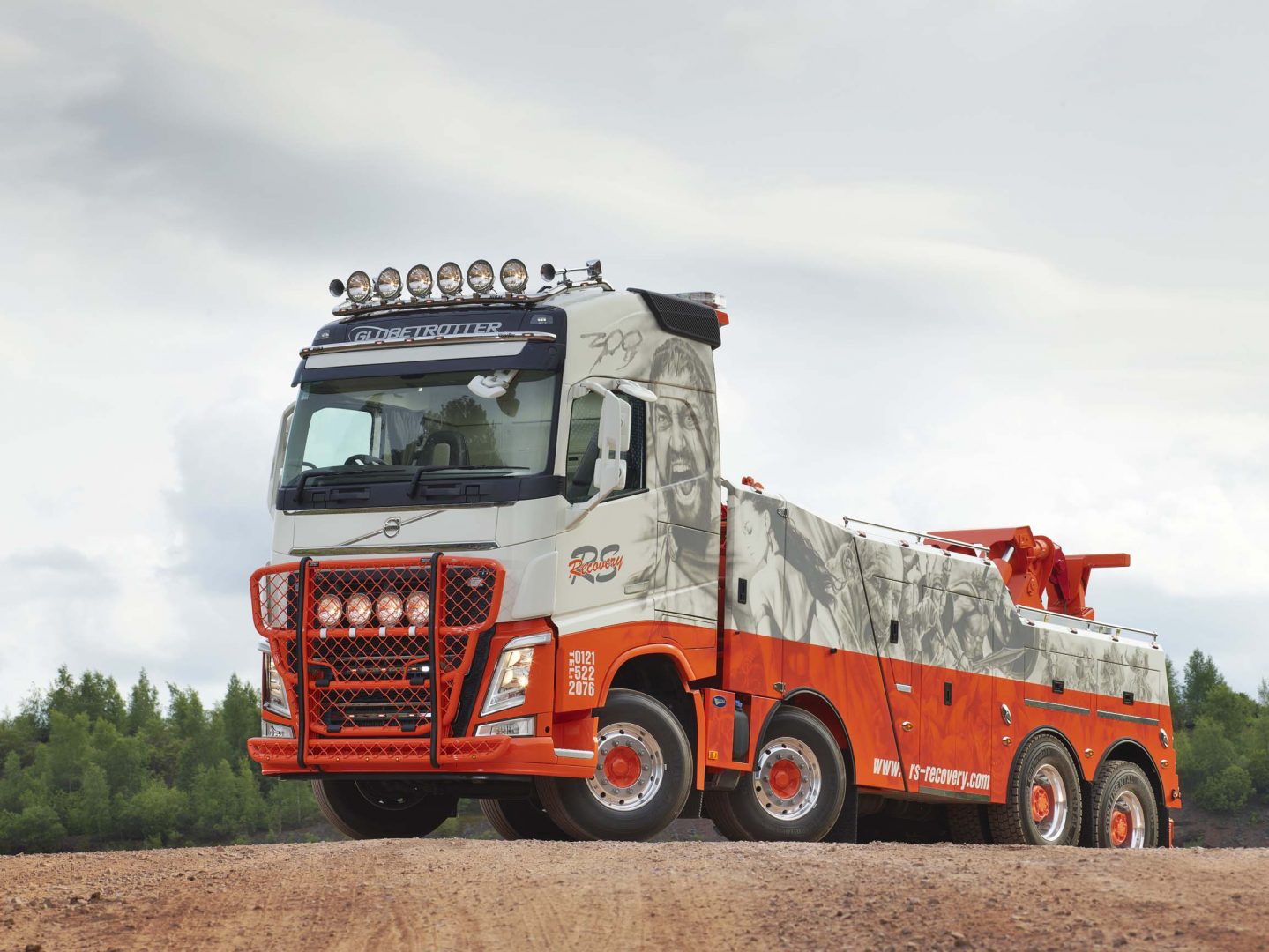 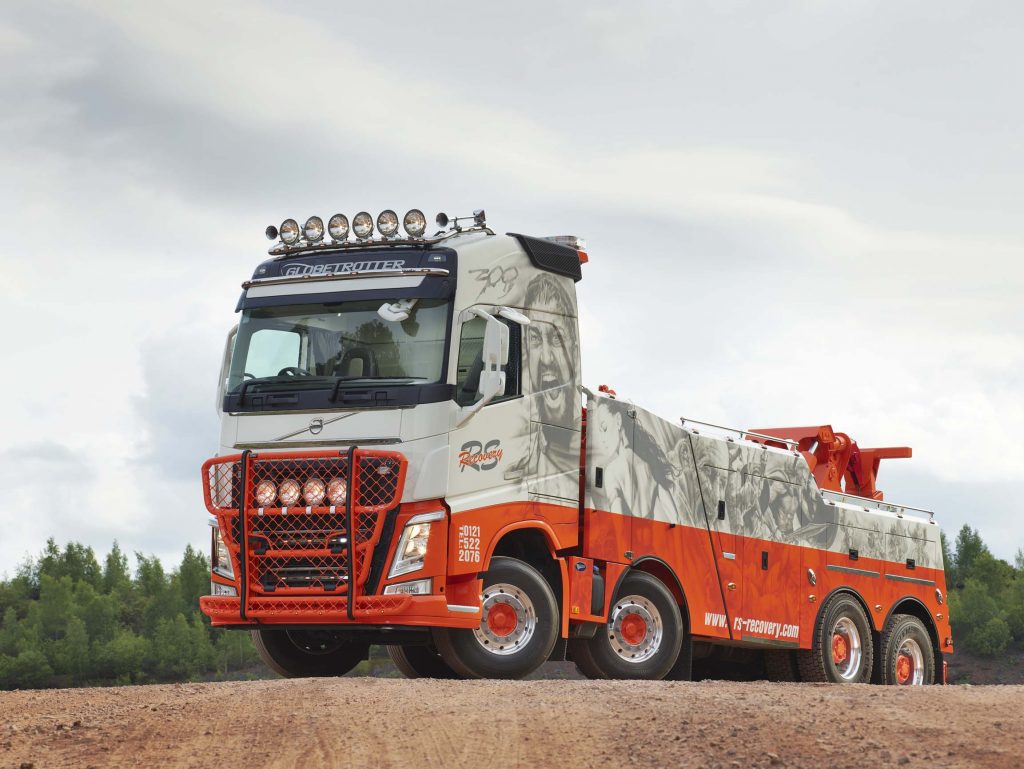 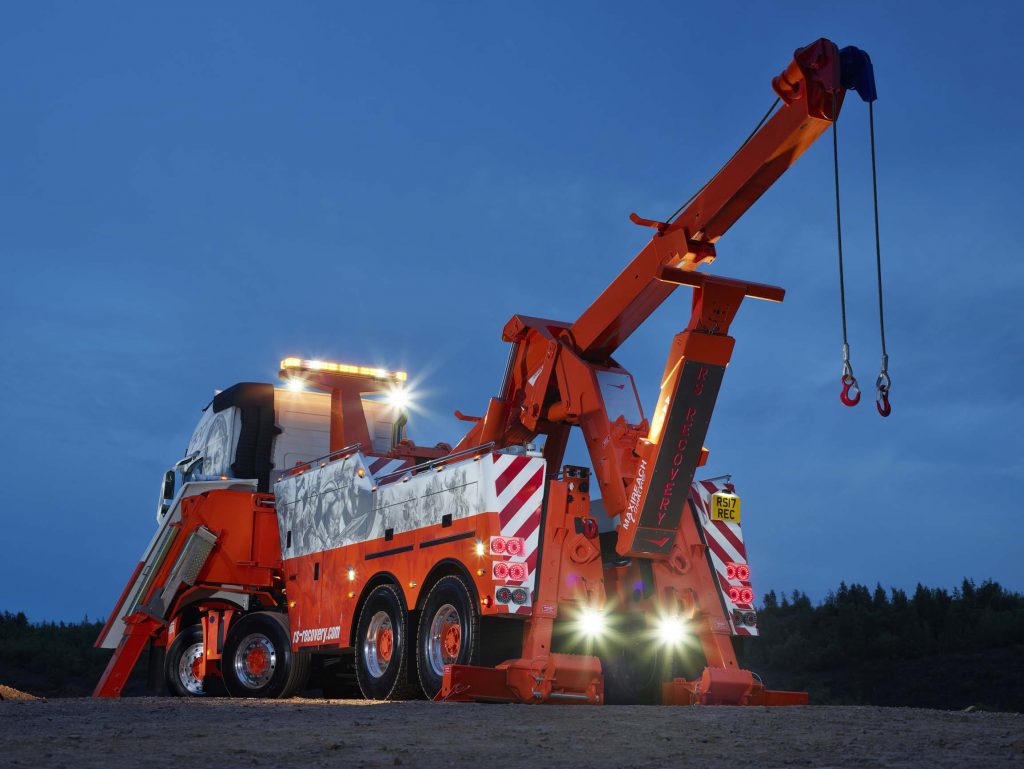 The equipment is from Boniface Engineering in Thetford.  We went for the Recoverer Trident with Side-winders (which you can see extended out from the side of the vehicle).  We already had a similar specification vehicle on the fleet but with a 3-axle chassis, so we knew what to expect.  The side-winders add great winching capability and stability to the truck when towing heavy loads.  It’s the first time we’ve gone for a 4-axle chassis and we can now see why it is so popular among other operators.  The additional axle adds better steering and braking which is critical in certain scenarios.